5 Haunted Places to visit in Ireland

Would you dare visit?

There are many places we encourage you to visit throughout Ireland. From the wild waterways, the looming hills, and the tall mountains, to the relaxing retreats and the glamourous spots for glamping. Now we are daring you to pay a visit to some of the most haunted spots Ireland has to offer. While many of these spots hold incredible panoramic views or majestic beauty of centuries old history, they come with a tale or two. When the sun goes down and darkness takes over, everything about these locations’ changes. Are you afraid of the dark?

Loftus Hall has long been considered the most haunted spot in Ireland with sightings, sounds, and creepy goings on for a long time. This large mansion house at Hook Peninsula was built in 1350 and went through numerous owners throughout the centuries, even at one time being run by an order of nuns. It is currently under a vast redevelopment programme to bring it back to its former glory. For all of its austere surroundings and dense history, Loftus Hall was visited not only by Queen Victoria, but they say, it was frequently visited by the Devil! The stories are so intricate and detailed that many will dare not step foot inside the expansive walls after dark. A young lady of the house, Anne Tottenham, is said to haunt the tapestry room after spying the Devil one evening and being subsequently locked away by her family until she died. Since its reopening to the public in 2012, many visitors have felt an unease through the corridors of the most haunted home in Ireland. 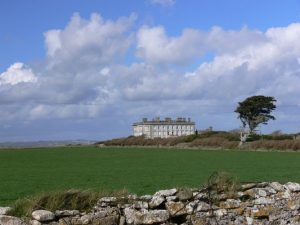 This file is licensed under the Creative Commons Attribution-Share Alike 3.0 Unported license.

For those you love their Sunday afternoon walk through forest trails and hills with incredible views of Dublin city, the Hellfire Club is a stunning spot to indulge in nature. It has a much spookier past which you may not be aware of.  In the eighteenth century, a lodge was built at the top of the hill by William “Speaker” Conolly a vastly rich man and politician. It is said he destroyed an ancient cairn in order to erect the building. In a bizarre twist, the roof of the lodge was destroyed in a storm with locals surmising, Conolly had angered the spirits. This was the beginning of quite a long tale with even more twists, turns and aggrieved spirits. After Conolly’s death the lodge was consumed by the Hellfire Club who notoriously behaved amorally, dabbling in debauchery leading many to believe they were Devil worshippers. There are many tales of sacrifices, visions of the Devil, strange goings on and a terrible unease. While the sun shines, the hill is stunning, at night, would you dare visit? 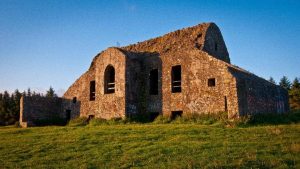 Sixteen people suffered a harrowing demise in 1763 when the river Nore flooded, in Kilkenny. Two bridges traversed over the river, John’s Bridge and Green’s Bridge. As the cities people gathered on John’s Bridge, they watched the collapse of Green’s Bridge in shock, unaware that the structure they stood on would also collapse and drop them all into the river below. Locals say they often see figures standing on the bridging gazing in the direction of where Green’s Bridge once stood with an eerie foreboding lingering on the crossing. Others have said they have seen shadows drowning or struggling underwater. The tragedy of the bridge collapse seems to still haunt the city.

Duckett Grove Castle holds the best stories and supposed sights and sounds of one of Irelands most fabled temptresses, the Banshee. The mansion house built on a huge expanse of land by Thomas Duckett during the 1700’s is a fascinating building which oversaw a number of additions in the 19th Century by Thomas’s grandson William and is now currently under reconstruction and conservation by Carlow County Council.  Despite all of this, the banshee is said to still be a visitor! Legend says the banshee is actually a woman who William had an affair with. After her death, her mother is said to have put the “Widows Curse” on William and hence the banshee can be seen and heard throughout the Duckett Grove. There are a number of stories from people who claim to have seen the banshee over the years and have been unbearably terrified of her, some even dying at her sight or having relatives die because of her visitation. While the banshee is the main sighting at Duckett Grove, there are apparently many others who roam the corridors who should no longer be! Members of the Duckett family, servants and a phantom horse and carriage. Would you dare pay a visit to the Banshee? 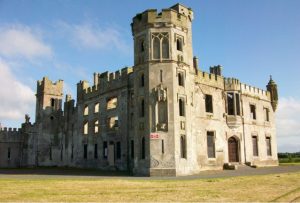 This file is licensed under the Creative Commons Attribution-Share Alike 3.0 Unported license.

Considered for be Ireland’s most haunted castle, our last dare is Leap Castle in County Offaly. With its tumultuous history of blood and death, the castle is home to what owner Sean Ryan considers to be spirits than ghosts. He and his wife, Anne, have lived alongside these spirits since 1994 when they took over restoring the castle and have thrilled many with creepy stories of the hauntings. Having once been a fortress and at one stage a tomb, Leap Castle, which was built in the early 1500’s witnessed much horror and devastation throughout the centuries and was the scene of many complicated murders. The most notorious spirit is the Red Lady who is said to walk the halls with a dagger. I’m not sure we’d like to face her or any of the spirits of Leap Castle in the wee small hours of the night. Would you? 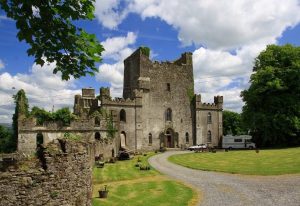